Send your input to interum Class Scribe - Gerry Buckosky at gerrybuckosky@gmail.com
Visit the 1965 Class Notes Photo Album, Photo Album 2 and Photo Album 3 to see all the photos below full-size!

Denny Coll & Fred Smith reported that USMA1965 had a nice gathering at the Hilton Meadowlands and Met Life Stadium for the Army Navy game. Part of the pre-game activities remembered the 20 years since the 9/11 terrorist attacks on NYC, PA and the Pentagon. Lee Greenwood and the fans sang "God Bless the USA." Lee Greenwood sang that song 20 years ago at the Army Navy game. It was memorable and moving both times.
While the outcome of the game was disappointing, we had a nice gathering. We shared a lot of memories, old and new life stories, with good camaraderie and the joy of being together. And there were certainly a lot of laughs. The Army Navy game will be in Philadelphia in 2022. 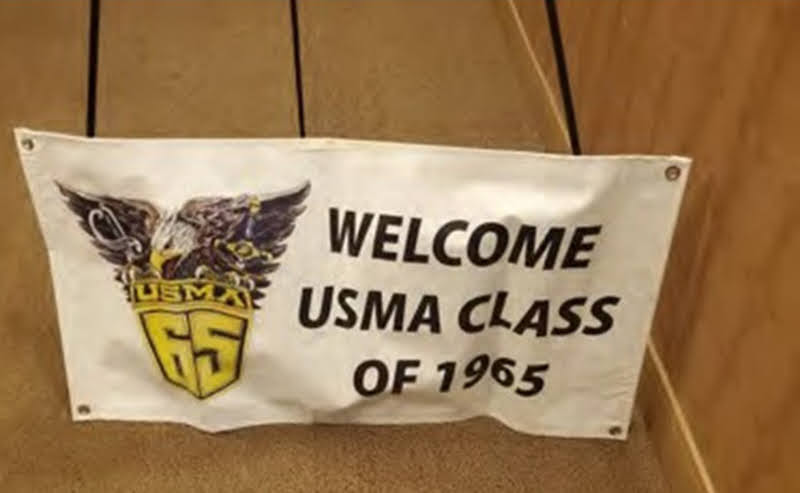 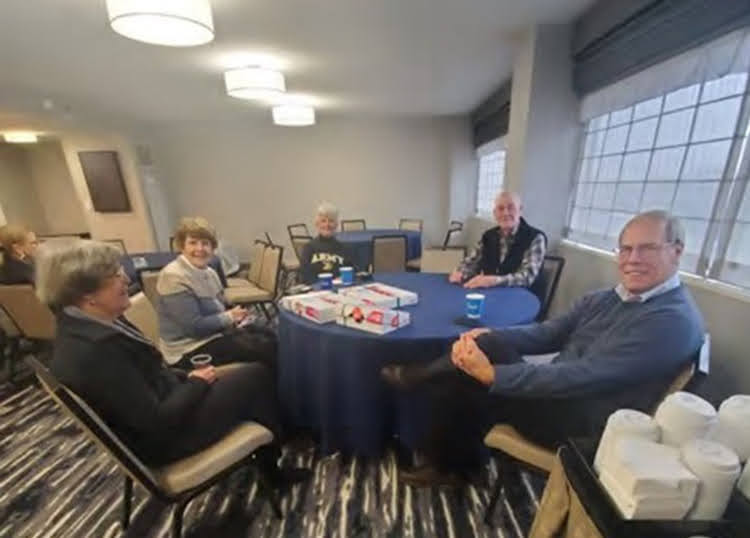 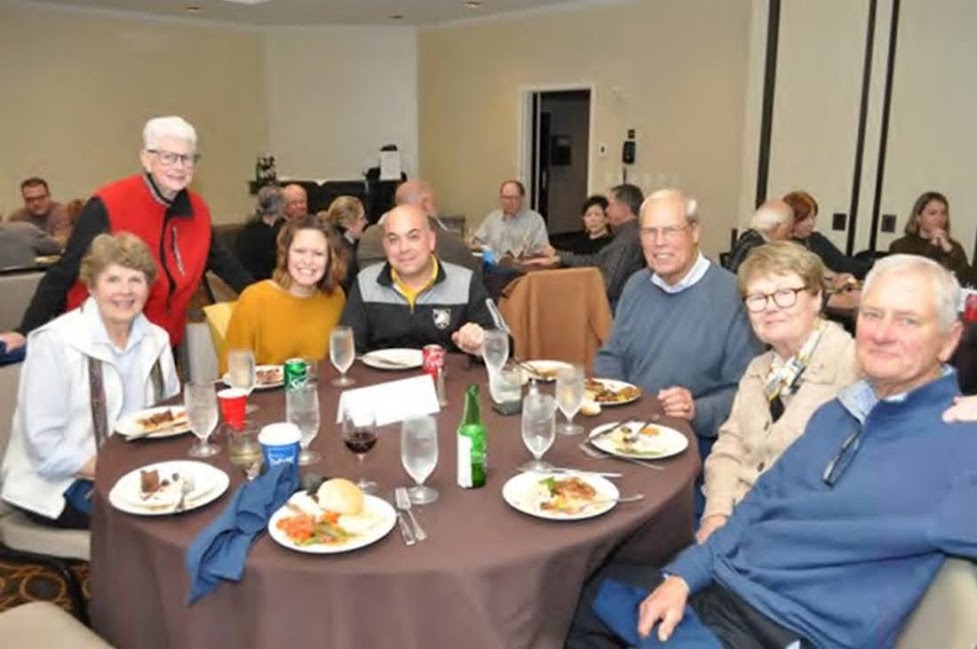 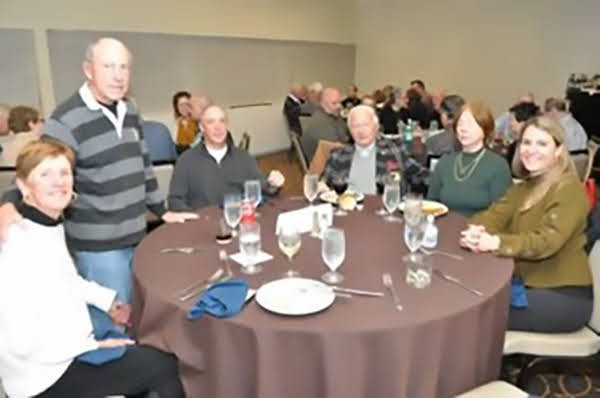 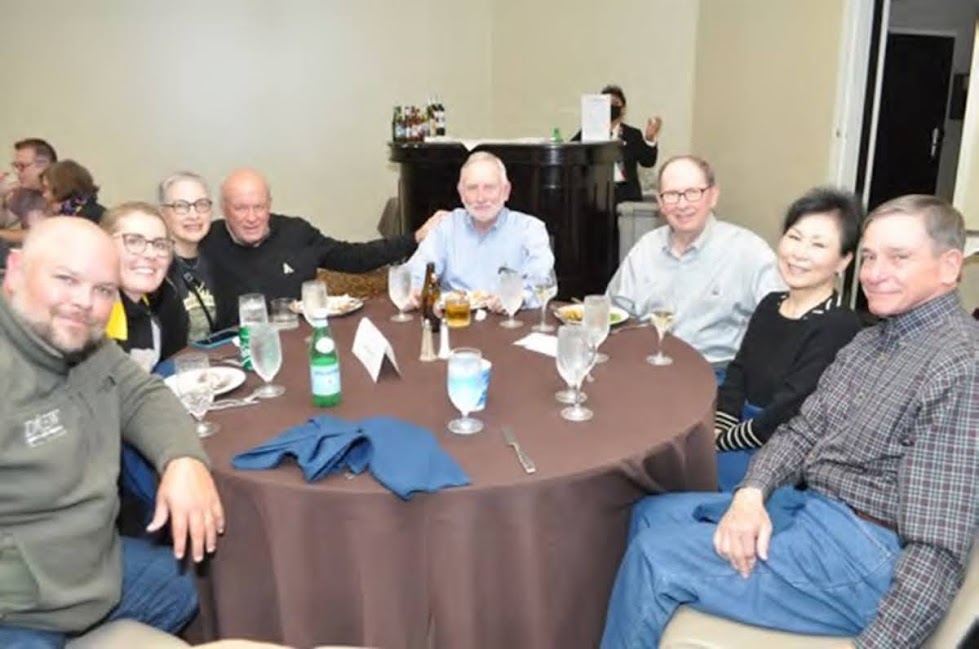 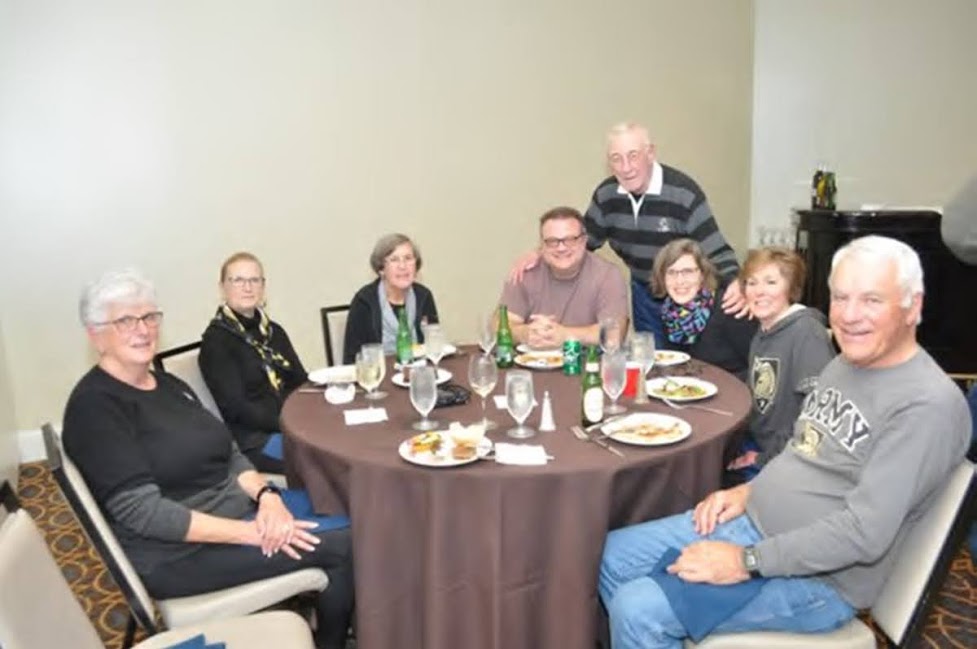 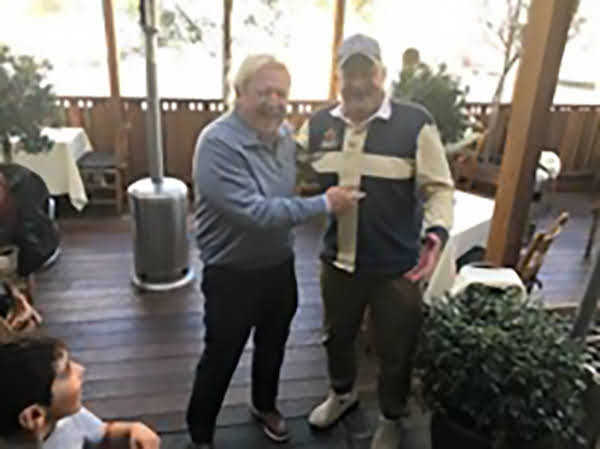 Some 60 years ago, Richie Donahue and Gerry (Boo) Buckosky were sworn in as West Point cadets and placed in Company A-2. We spent some time walking the Area together, but did not particularly bond until the summer of '63 when we and three other classmates: Bo Forrest (RIP), Russel Dornier (RIP), Andy Zaleski hooked up for a driving vacation (VW Van) through Europe after AOT tours. It was a rip-roaring time for the five with many hilarious experiences none would forget.

In any event, a week ago today, Richie was in Palo Alto. I drove up from San Diego and we had a long lunch kickin' our academy years around . . . lots of laughs. Then it was over and time for pictures. Below, Ritchie is pointing to me with his "finger" while we are caught up in laughter. Great time Ritchie.

Our condolences go out to the families of the 15 who have joined the Long Grey Line this past year:

Gordy reviewed many different aspects of the contest as Army defeated Liberty University in Michie Stadium 31 to 16 on November 27th. 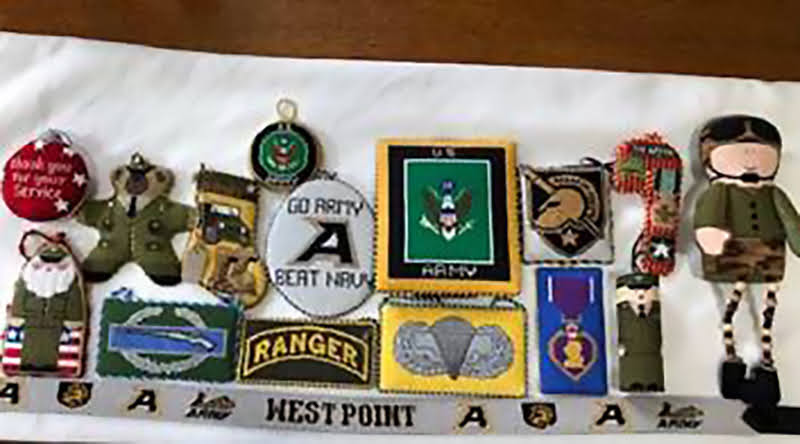 Attached a pic of 13 tree ornaments, a soldier doll and a belt my wife, Grace Anne, made for me. We have been together 13 years now and she has made at least one for me every year. The belt took her over 100 hours to complete. I thought it might be of interest to some.

Gordy reviewed many different aspects of the contest as Army defeated U. Mass. in Michie Stadium 33 to 17 on November 20th. U. 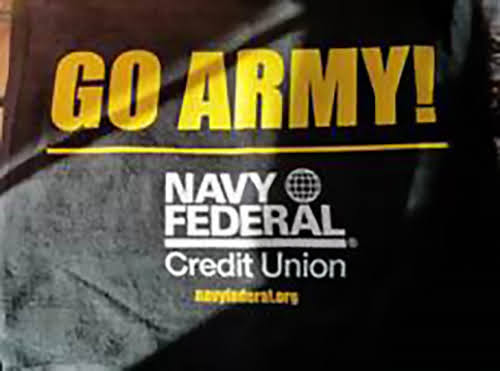 This weekend there is a 12K run supporting military veterans and active duty in Mobile at the Battleship Alabama Memorial Park. My wife runs this one every year. The 2021 race is in honor of the US Army. At the race check in was a Navy Federal Credit Union tent with a USNA graduate handing out memorial towels. 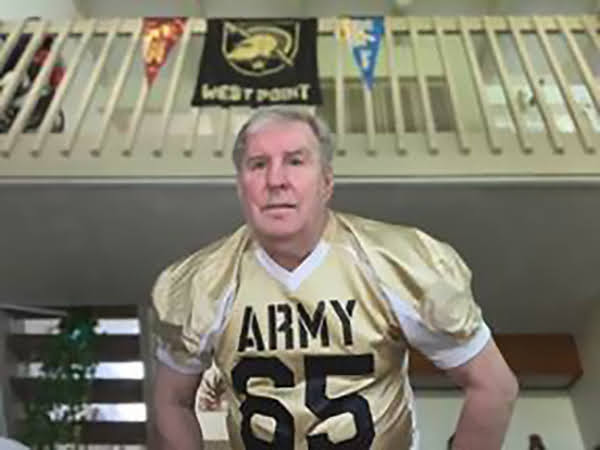 What used to be 150s Football is now Army-Navy Sprint Football. Mark West is the present coach Tommy Thompson, below, want to play. 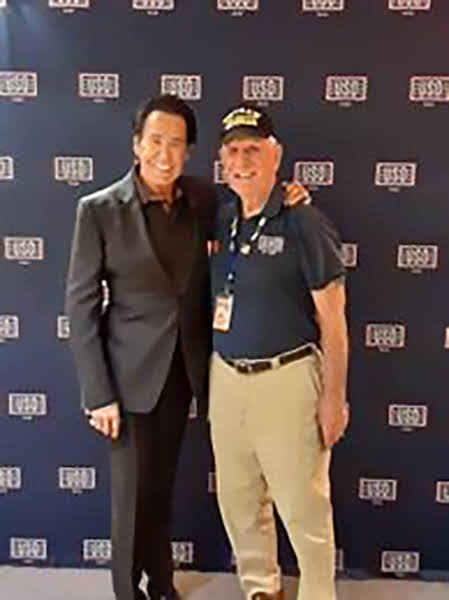 Eleven years ago, on November 11th, that year, Wayne Newton, Senator Reid/NV other officials as well as the national USO succeeded in establishing the LV USO airport lounge.

On November 11 at 1100 hours this year, we the USO volunteers, gathered at the aforementioned USO airport lounge with Wayne to celebrate our 11th anniversary happily serving the US Armed Forces active duty and retired service members passing through Vegas. As most people know, Wayne has been very involved with the USO for many years.

I remember his doing USO tours in Vietnam. Anyhow, Wayne graciously asked to shake hands and have pictures taken with us USO volunteers as shown below.

Gordy reviewed many different aspects of the contest as Wake Forest defeated Army in Michie Stadium 70 to 56 on October 23rd. Wake Forrest has has an outstanding year owing to its outstanding offensive passing attack. 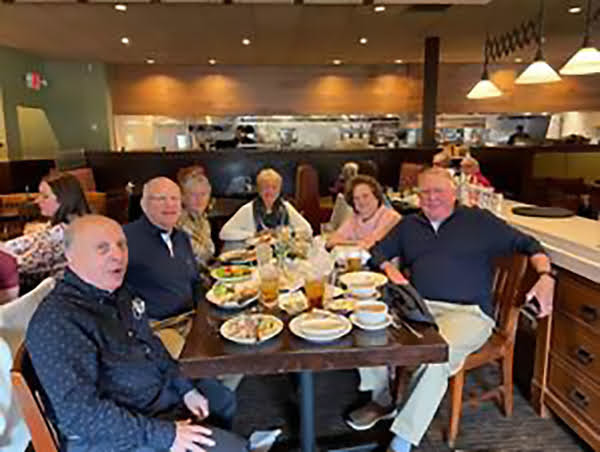 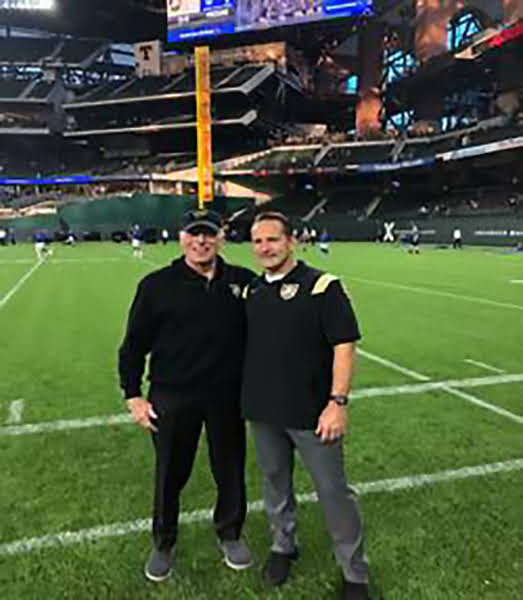 Dan relates: . . . still hoarse after one of the most exciting FB games I’ve ever seen. Above left taken immediately before the game on the floor of Globe Life stadium with assistant coach of the army team, Ben Kotwica. 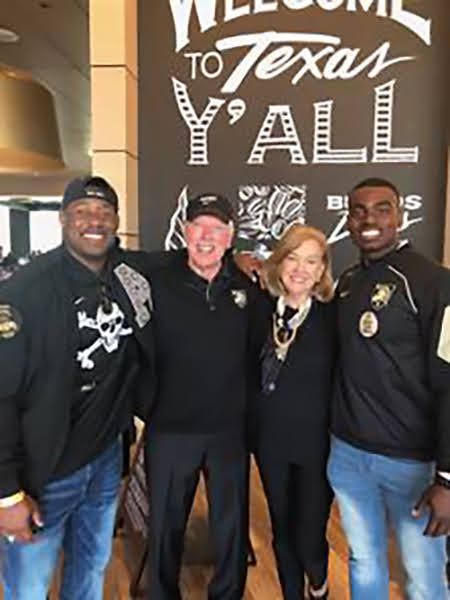 Ben was co-captain of the 1996 team that won the commander in chief’s trophy and was recently hired by Army head coach Jeff Monken. Above right: the four of us was taken immediately after the game in the “Live! By Loews” hotel adjacent to the stadium.

Susan and I are standing between 2LT Sanden McCoy (on the left), co-captain of the 2020 team; and 2LT Joe Stephenson, linebacker on that same team that won the commander-in-chief’s trophy. 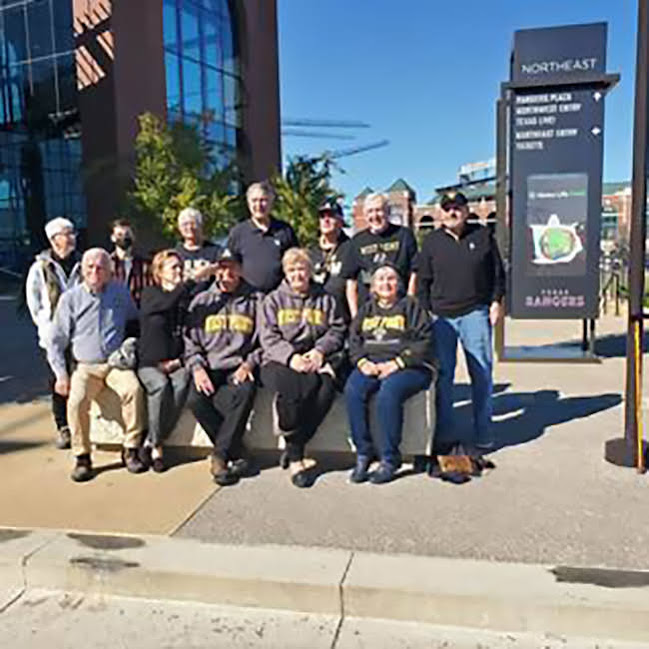 Pictured left are Colls, Axley, Atcheleys, Cindrics, Neals and Maddens. Bob Atchley is the tallest in the rear. I did not get a detailed identification. 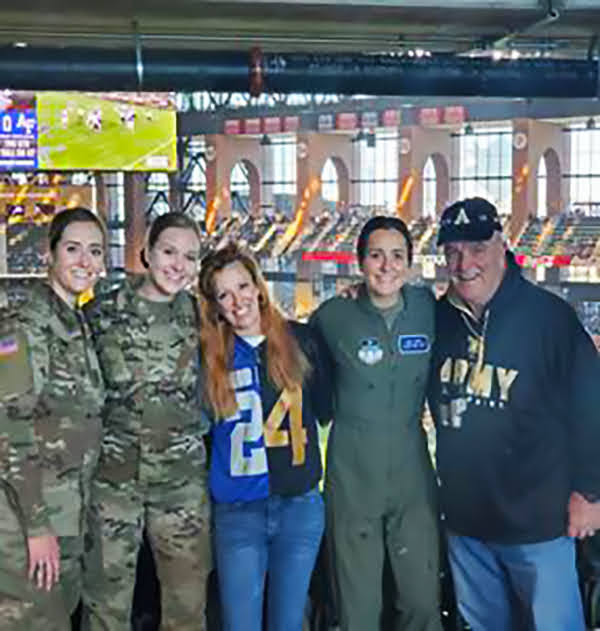 Our condolences go out to the families of those who have joined the Long Grey Line this month: 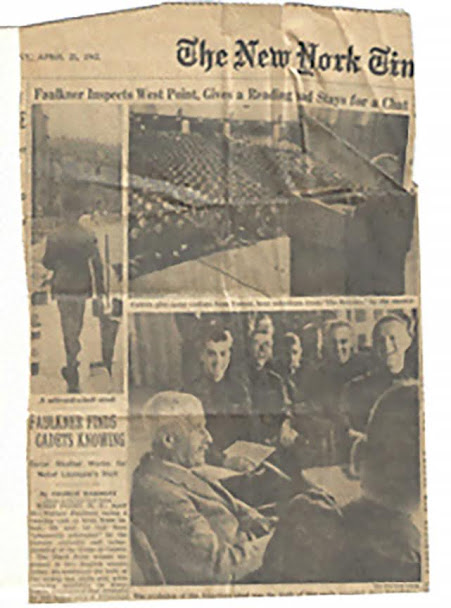 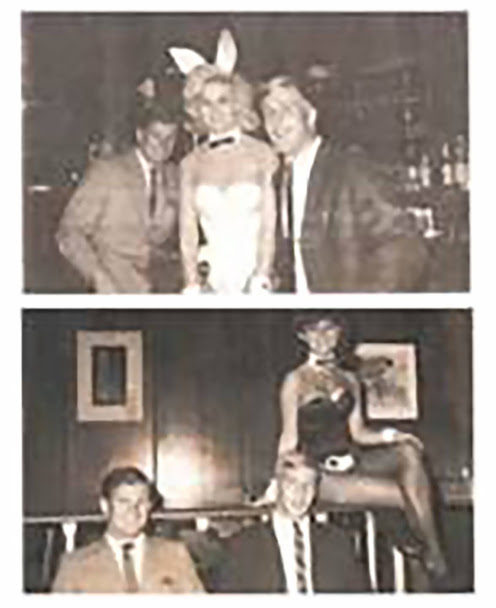 Do you remember when William Faulkner schooled selected members of the class? And Playboy Bunnies? Tom Genoni, Tommy and a few others appear with Wm. Faulkner. Chuck Shaw and Tommy Thompson with Bunnies.

Gordy reviewed many different aspects of the contest as Wake Forest defeated Army in Michie Stadium 70 to 56 on October 23rd. Wake Forrest is having an outstanding year owing to its outstanding offensive passing attack. 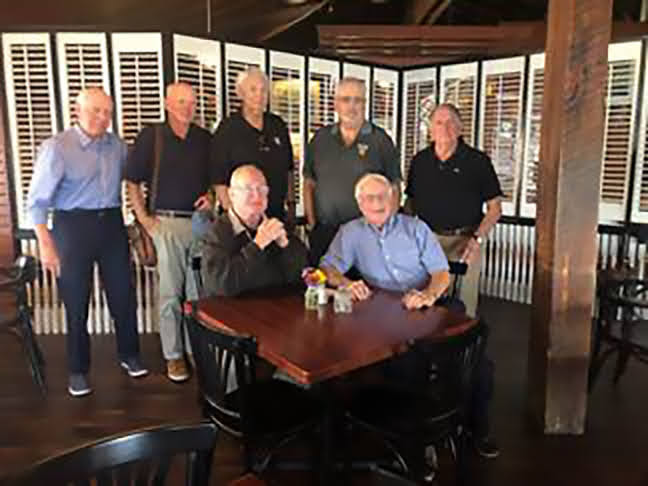 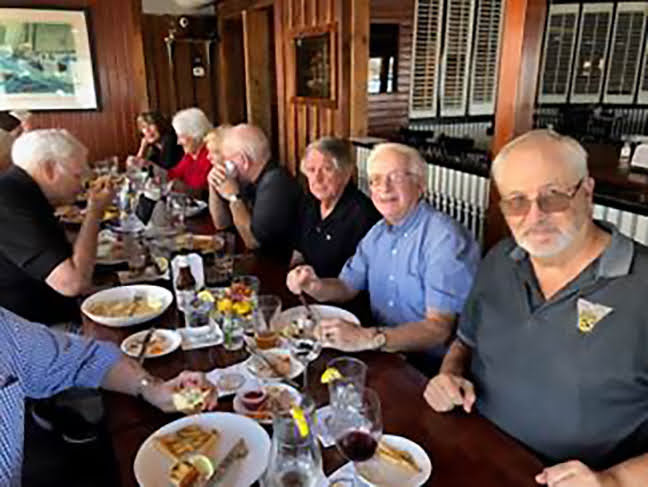 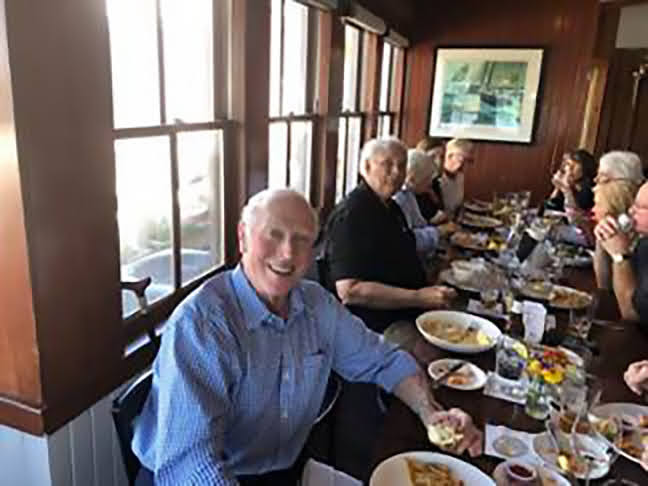 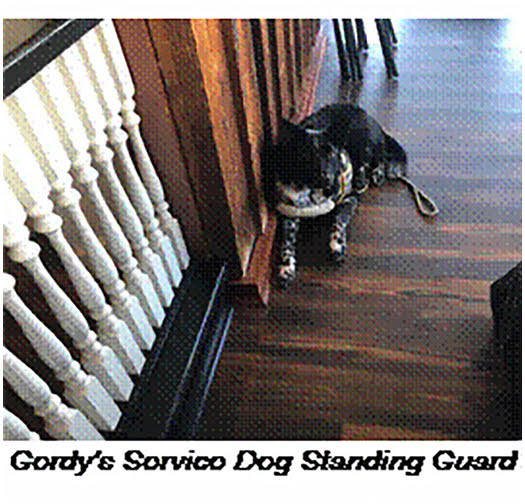 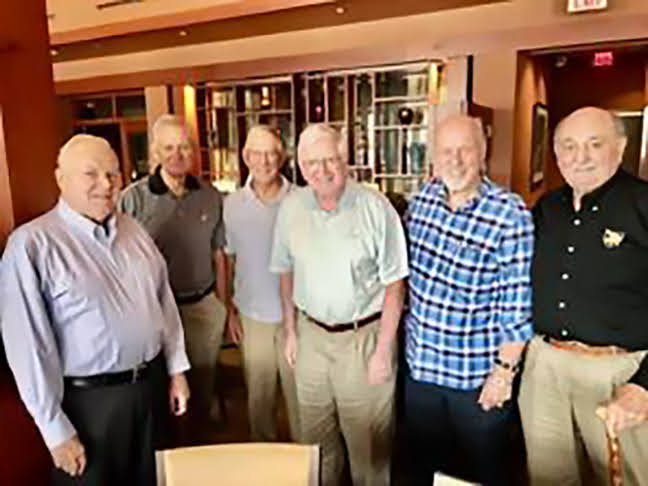 Joe Barkley reports:
As previously reported, here in Southeastern Pennsylvania and New Jersey, we have a group of class mates who meet on an irregular basis for lunch and discussions. Recently we were able to get six classmates together at Seasons 52 in King of Prussia. Fred Smith was the host.

It was really good to get together after all the “Covid restrictions” and see each other. Discussions were lively and wide ranging. We will meet again on January 11, 2022, in New Hope. Rick Kuzman will be the host at that gathering.Anyone who is within “range” is invited and welcome to join the group of “irregulars.”

Great meeting and lunch – looking forward to seeing everyone in January, 2022!?

Army has a bye week There was no MMQ as Army had a bye week.

Gordy review the play by play as Wisconsin defeated Army in Wisconsin at Randall Stadium 20 to 14 on October 16th. Wisconsin has been performing well in the Big 10 conference. Army makes a good showing in games against Big Ten opponents, including the University of Michigan. 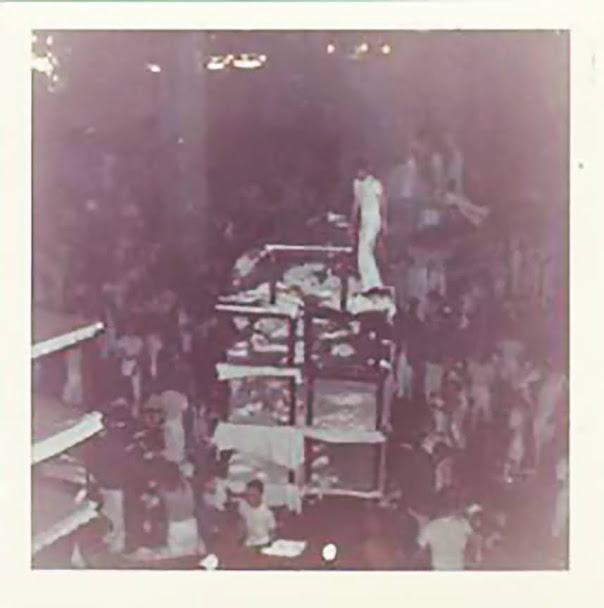 We recalled the 1963 mess hall rally before the Penn State game. Chuck Nichols was on guard duty:

“One additional bit of information on the rally. I was on guard duty that night at the front door of the mess hall when the howitzer was set off and was almost hit by the glass raining down. I was relieved of guard duty shortly thereafter but don't remember who relieved me. I poked my head inside the mess hall before leaving for my room to see the mayhem. I think that was the start of tinnitus in my left ear.”
Needless to say there was major fall out, but it was one helluva time.

Gordy reviewed the play by play as Ball State defeated Army at Michie Statium 28 to 16 on October 2nd. This comes after 4 straight victories during September, leaving Army 4W-1L.

MMQs: GORDY LARSON
Gordy Larson is acknowledged for his Monday Morning Quarterback (MMQ) analysis which he shares during football season. September Despatch 79 neglected to acknowledge the MMQs for that month so they are listed below.

Our condolences go out to the families of those who have joined the Long Grey Line this month: