Send your input to Class Scribe - Gerry Burkosky at gerrybuckosky@gmail.com
Visit the 1965 Class Notes Photo Album, Photo Album 2 and Photo Album 3 to see all the photos below full-size!

I was called today to announce the passing of Mrs. Westmoreland @ 94 years of age. She had been living @ the Bishop-Gadsden Seniors complex in Charleston, SC. I have a dear tennis pal there whom I've visited over the years.
He would take me to Mrs. Westmoreland's quarters and she would fondly recall the days of being the Supe's wife and our Class of 1965. In Rick Bunn's tenure we sent out a few photos and a kind note she wrote to our Class. May She rest in peace.
Scribe Adds: Kitsy was interviewed as part of the Oral History Project whose idea was that of our own Bob Doughty when he was History Department Head. Our 50th Anniversary West Point Gift honored West Point's Oral History project.
See: Kitsy Westmoreland (West Point Oral History)

I am visiting my son Chip at West Point. He is recovering from minor knee surgery and doing well. He lives on Post in the central apartments behind the AOG building. I walked around Lusk reservoir to the Cadet Chapel and back this morning and noticed a Vietnam memorial near the shoreline across from the stadium SE entry gates. Shown below is the monument and one of the class benches. Nice. Skip OD 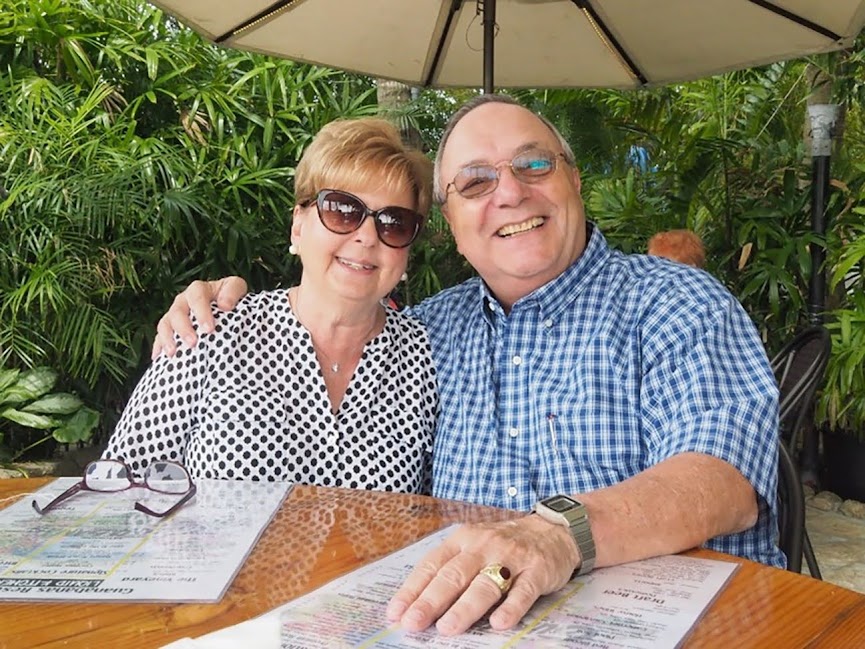 Unfortunately, Ingrid & I are leaving tomorrow for Germany to attend a wedding and a family reunion, returning in mid-August. So we will not be able to attend, but if possible we would like to pass on our greetings and best wishes to all who are attending! 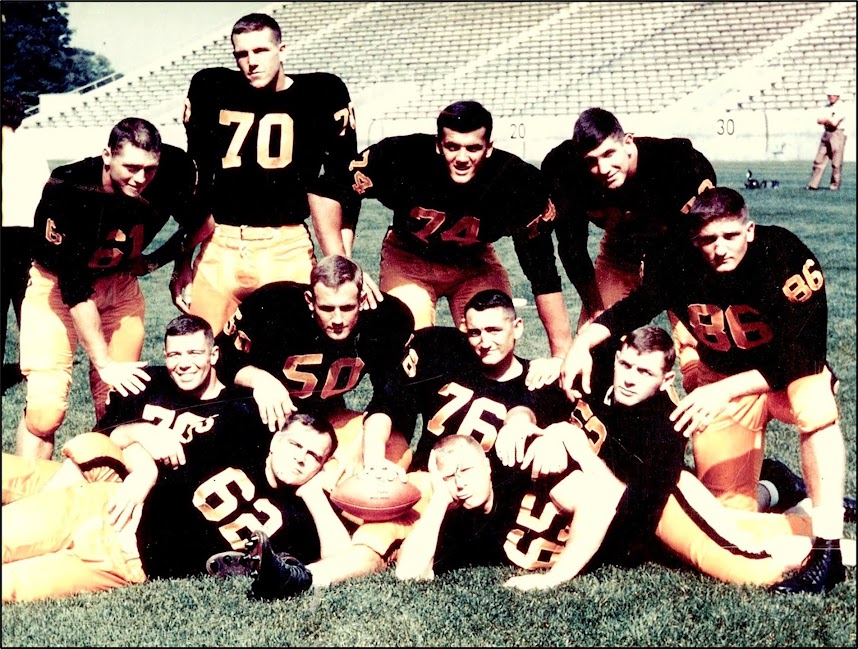 Dave LaRochelle provides background:
We were dressed up in August 1964 after our practice, for a team photo op at the stadium. This photo op would be used for the team picture on page 395 in the FALL sports section of the 1965 Howitzer. While the rest of the team was getting individual photos running with and catching footballs, we linemen decided to take our own photos similar to the very old pictures of teams of the past. 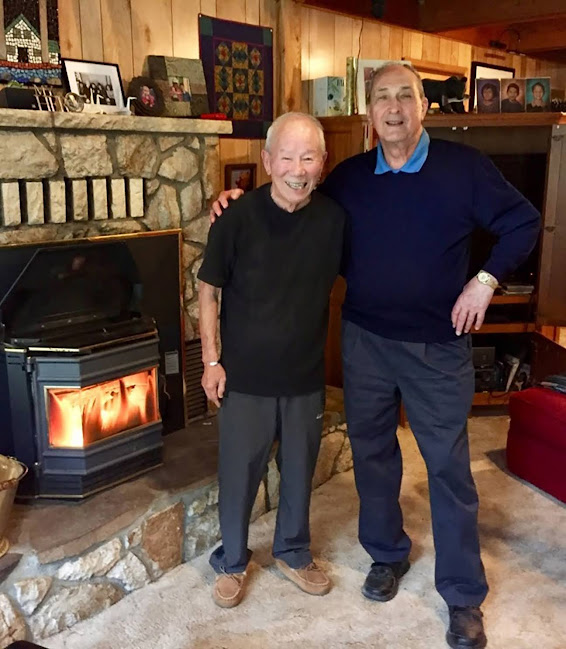 Thought you might like to see a photo of Tad Ono and myself when I visited him at his mountain retreat outside Portland, Oregon a couple weeks ago 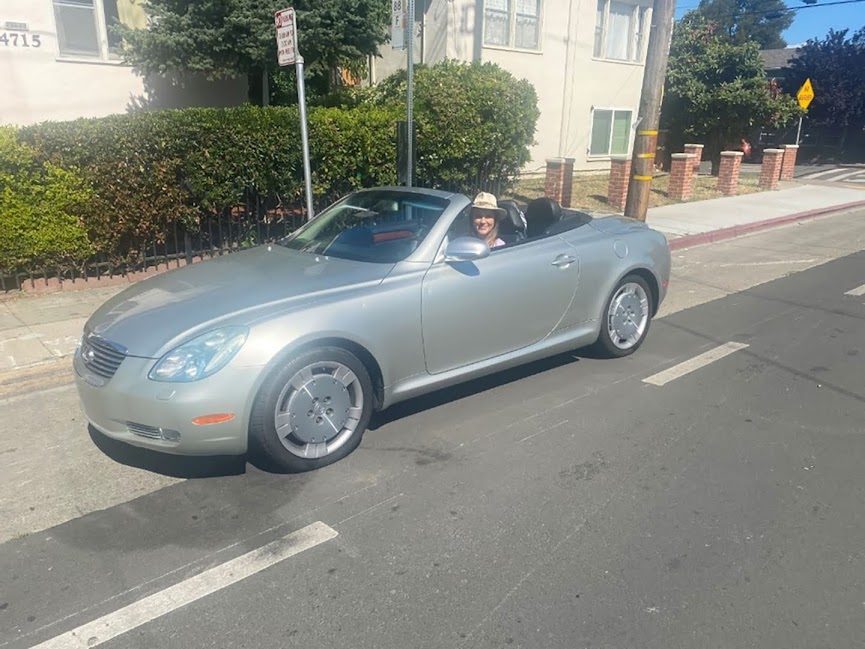 I have not shared my life in pictures via Listserve. So, this is the first. Bear with me. The "share" is in two parts because the original attempt exceeded the size limits for emails on Listserve. So here is scaled back part one.

I am now unmarried (twice). My last marriage was blessed with a lovely daughter, Lilan, pronounced "Lee-lon". (Best thing that ever happened to us.)

I had been keeping a 2nd car, but hardly driving it lately ... a garage queen. Since I was going to give it to Lilan as a final parting gift, I decided to give it now so I could enjoy her reaction. I drove from San Diego to Oakland last Saturday and left it with her. She loves it and is driving it all the time. These pictures story-tell the gift. 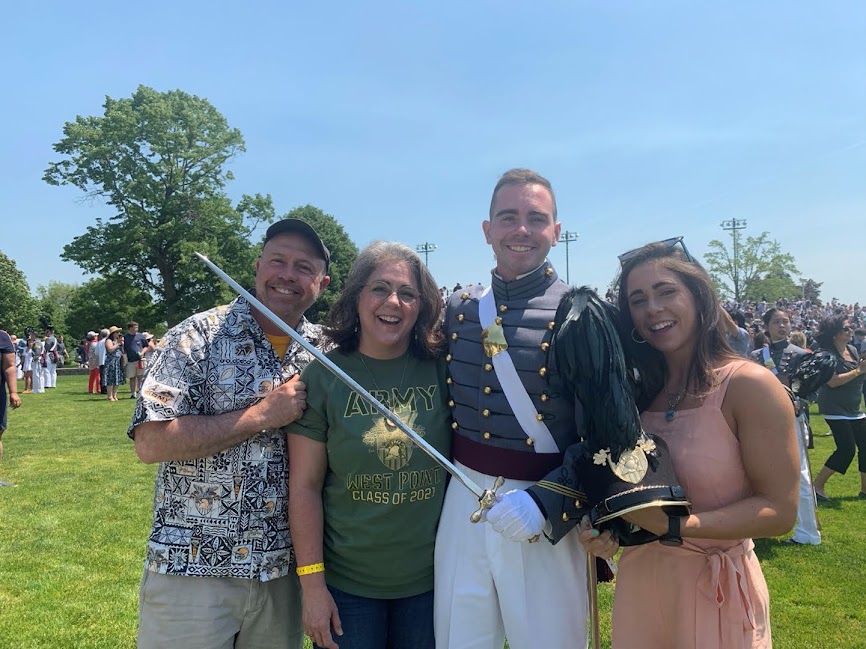 Boo, a great day! Attached is a photo of Grandson Sam Chase with Dad Ken Chase, class of 1991, Mom Ann and sister Erin. Sam branched Aviation and will be headed to Fort Rucker for flight training

Former Superintendent Robert Caslen was relieved of his position as president of the University of South Carolina. The charge was plagiarizing. Rollie Stichweh wrote a message of support.

This is the Supe's reply:

Rollie, Thank-you! It is great to hear from you and I appreciate your note very much. It means a lot.
I know you're in conversation with classmates and others, so for what it is worth, I gave my speech writer the quote along with other speeches and quotes and told her to put it in the speech. She did and it was not attributed. I should have noticed but I didn't, and it wasn't until the news story came out that I realized what I did. It was an honest mistake; an inadvertent unattributed quotation, and not an intent to deceive (like every news story is making it out to be). Regardless, I said it and I own it, which is why I chose to not pass this off, or to lie, or to make excuses, or to put the blame on someone else. And therefore, as unfortunate as the consequences are, I can live with them. But thank you again for reaching out. It means more than you know. Bob. 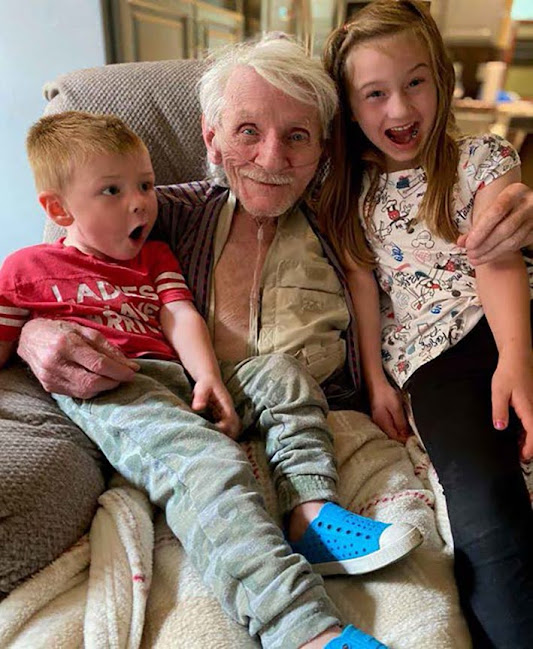 My daughter and family dropped by today. I managed to sit upright and smile at the appropriate time, whilst they did typical kid stuff with the piano and the dog, not pictured.

Best wishes to all, Step

SPACE STATION CREW DISCUSSES LIFE IN SPACE WITH THE MEDIA AND THE MILITARY Aboard the International Space Station, Expedition 65 Flight Engineers Shane Kimbrough and Mark Vande Hei of NASA, both retired U.S. Army Colonels, discussed life and work on the complex during a pair of in-flight interviews May 6 with WCCO-TV, Minneapolis and the public affairs office of the U.S. Military Academy in West Point, New York. See Aboard the International Space Station.

Kimbrough earned a Bachelor of Science degree in aerospace engineering from West Point in 1989 while Vande Hei calls Minnesota one of his home states. Vande Hei launched to the station in April on a Russian Soyuz spacecraft, followed two weeks later by Kimbrough’s launch on a SpaceX Falcon 9 rocket aboard the Crew Dragon spacecraft “Endeavour”.
West Point Grads aboard Crew Dragon. Note ARMY beat NAVY pennant in background:

Ralph Asplund sends a message from a friend: This is really sobering. First click on a state. When it opens, scroll down to the city where you went to high school and look at the names. Click on the name and it will give details of the person's death, a picture or at least their bio and medals. This really is an amazing web site. Someone spent a lot of time and effort to create it. I hope that everyone who receives this appreciates what those who served in Vietnam sacrificed for our country. See: Vietnam Virtual Wall. 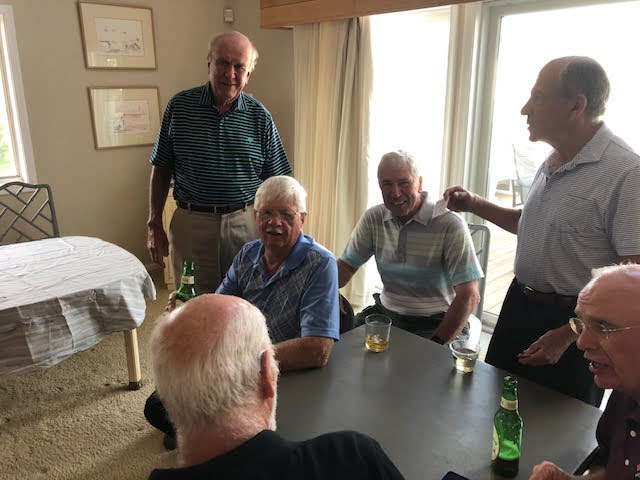 The twice postponed Class Golf Outing in Ocean City MD was held 6 to 9 June 2021. It was the first outing as a Class in Ocean City in more than 20 years. Twenty-four Classmates made the venue and a good time was had by all. 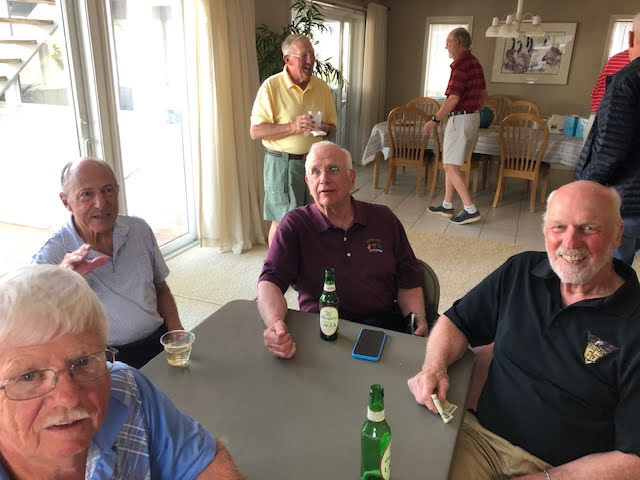 The Quality Inn Boardwalk on the Boardwalk in downtown Ocean City was our lodging, where the hotel provided a splendid hospitality area in the 10th floor penthouse area. This excellent facility was enjoyed by all. There was storytelling and the gamblers played poker. (Bernie Ziegler was reported to the IRS by his Classmates after his big night at the poker table.)

We played three courses: Lighthouse Sound, Eagles Landing and Baywood Greens. All were scenic and in wonderful shape! On Monday and Tuesday, we played scramble with team Harter, Bonnett, Radcliffe and Kuzman winning Day 1 and team Laughlin, Bonnett, Henneberry and Frank winning Day 2.

On Monday night, we also had a nice group dinner in the Lighthouse Sound GC Clubhouse. On Tuesday evening, Fred Smith hosted a catered barbeque feast in his Beach House in Bethany Beach, DE. (Photos below.) Both events were superb and gave all the opportunity to “get caught up.” A big thank you to Fred Smith for his efforts in the local area to make things special.
By Day 3 a bunch of exhausted seventy-year-olds played Baywood Greens, "Augusta of the North." Baywood Greens is a wonderful layout with hugely impressive landscaping! After three days of golfing, we all agreed to rethink how much golf is enough in the predominantly social gatherings.

Fred Laughlin volunteered to do some research on hosting an outing in the Phoenix area in the October/November time period. More to follow on that as he explores options! Click here for all photos.

We are saddened to learn of the loss of our classmate Bruce Marshall as a result of a most unfortunate traffic accident while Bruce was cycling, his way of life. Bruce, a member of BIKEMARYLAND, was hit and killed by a motorist while at the entrance of Gunpowder Falls State Park and Paper Mill Road, in Phoenix, Maryland. Funeral arrangements will be announced when they are known. A separate farewell has been sent. 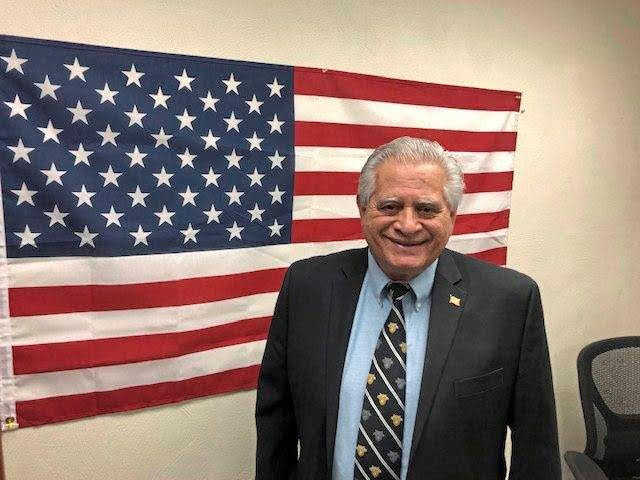 Westmoreland County Sheriff James Albert named Thomas S. Abraham, a U.S. Army veteran from Unity, as his chief of staff. Tom’s background makes him a nice asset in this office. He has a lot of experience in budgets, so he’ll be working more in that kind of an administrative role,” Albert said. Abraham said he is happy to “be of service” to the community where he was raised.

“It’s about service. There’s a big need in this country for the rule of law and the sheriff’s department is a big part of that,” Abraham said.
“The sheriff asked me to help out and I’m willing to serve,” Abraham said. Abraham graduated from the U.S. Military Academy at West Point after his graduation from Greensburg-Salem High School. The Greensburg native played football and wrestled in high school and at the military academy. As a lieutenant and graduate of Airborne Ranger School, Abraham served in Vietnam and was company commander for advanced infantry training before graduating from U.S. Army Intelligence School. After the military, he worked in management with the Polaroid Corporation and also worked for Montgomery County in Maryland.

Abraham is also the founder of Veterans Angels, a nonprofit that seeks to help veterans who are suffering post-traumatic stress syndrome. Abraham succeeds Roger Eckels, a retired district judge from Mt. Pleasant, who left the full-time post as the sheriff’s second in command in February after a year on the job to devote more time to his family. 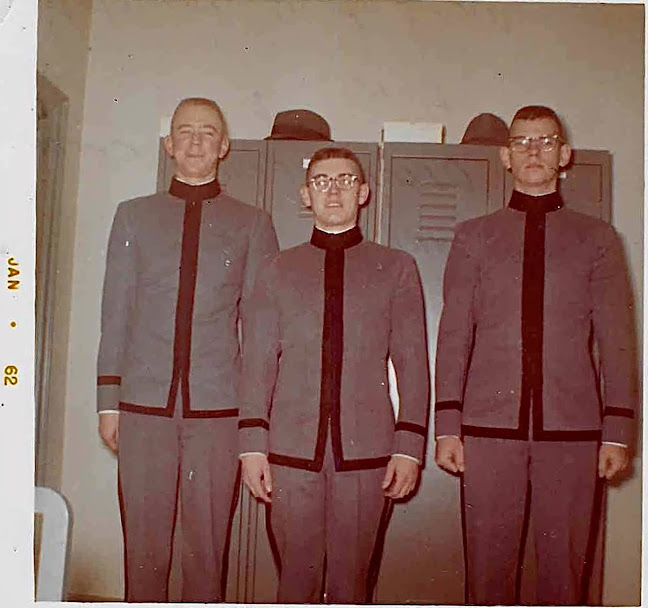 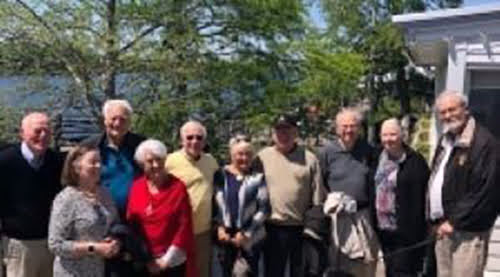 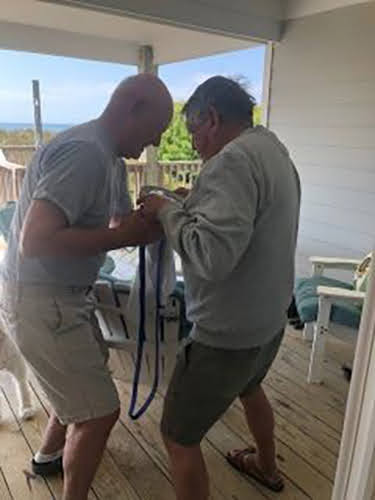 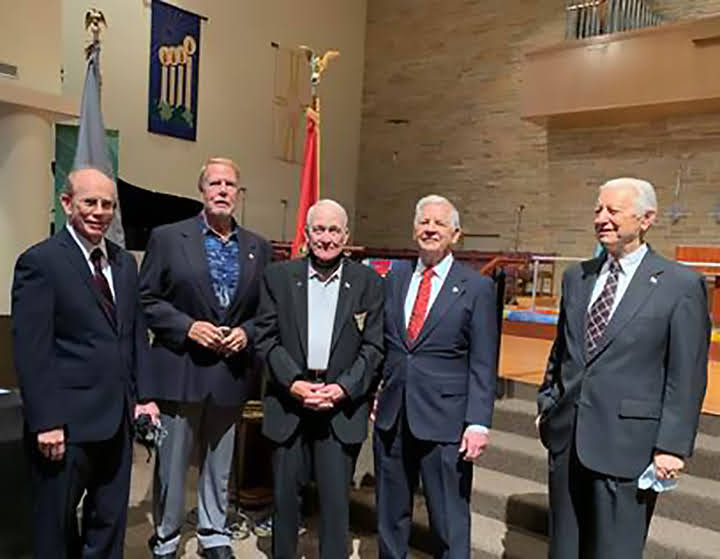 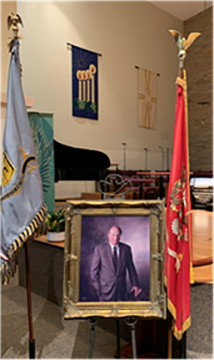