It is with great sadness that Cadet Kade Kurita, 20, from Gardena, California, was found dead Wednesday October 22, at 9:47pm at West Point.

“We are grieving this loss and our thoughts and prayers go out to Cadet Kurita’s family and friends” said Lt. Gen. Darryl Williams, 60th Superintendent U.S. Military Academy.

Kurita was unaccounted for since Friday, Oct. 18, at approximately 5:30 p.m. when he failed to report for a scheduled military skills competition.

“I would like to thank the N.Y. State police and the 23rd MP Company along with partners,” said Lt. Gen. Williams. “They exhibited exceptional professionalism as demonstrated by their tremendous efforts in searching for Cadet Kurita.”

An Army sergeant faces multiple charges including involuntary manslaughter in connection with the June rollover crash near a West Point training site that killed one cadet and injured almost two dozen others.

Staff Sgt. Ladonies P. Strong was charged Sept. 13 with one specification each of involuntary manslaughter, negligent homicide, prevention of authorized seizure of property and reckless operation of a vehicle, a U.S. Army spokesperson said. Strong was also charged with two specifications of dereliction of duty.

The charges are in violation of the Uniform Code of Military Justice, the Army spokesperson said. Strong is assigned to Task Force 1-28 in Fort Benning, Georgia. TF 1-28 could not immediately offer a comment on the charges.

“Cadet Morgan was a valued member of the Corps of Cadets and will be missed by all. The entire community is ensuring that our cadets are being cared for physically, emotionally, and spiritually,” said Lt. Gen. Darryl A. Williams, 60th Superintendent, U. S. Military Academy. “Our thoughts and prayers are with the Morgan family.”

Morgan, 22, of West Orange, New Jersey, passed away at the scene of the accident. He was a Law and Legal Studies major, and a recruited athlete who was a standout member of the Army Wrestling Team.

“We are devastated by the news of Chris’ passing. He was a talented, hardworking, and determined athlete who loved his sport,” said Army West Point Wrestling Coach Kevin Ward. “Chris had an infectious personality with a smile big enough to fill any room, and a heart big enough to love everyone around him. He made everyone around him better and he will be greatly missed.”

The Corps of Cadets will hold a vigil to honor Morgan tonight. A memorial ceremony for the West Point community and private funeral service will be held at the academy next week. 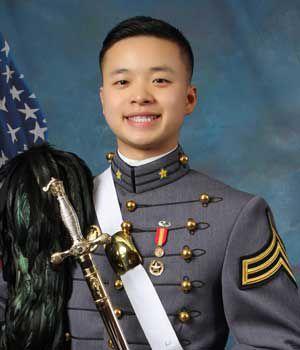 A West Point cadet who was mortally injured on a ski slope last month was honored in a tribute at the military academy in advance of his funeral Thursday.
Cadet Peter Zhu’s company on Tuesday trekked more than six miles to the slope on academy grounds where Zhu, 21, was found unconscious on Feb. 23, according to a post on the West Point Facebook page.
Members of Zhu’s company, Company E1, traveled with their military issued gear and carried Zhu’s ruck, or backpack, to Victor Constant Ski Area.
“What we didn’t expect was that we would be joined by approximately 200 others from the Corps of Cadets,” Felix Rosa Negron, a member of the Class of 2020, said in the Facebook post. “We carried his ruck untouched as we found it, and reminisced about our experiences with him.”
READ MORE…

We did a PHP software upgrade.  Here is the news you may have missed regarding our West-Point.org JOOMLA sites.  CLICK HERE!

Did we miss an important news event on this page?

CONTACT:
FEEDBACK@WEST-POINT.ORG
Provide us the link, and we’ll quickly review the situation!

-1/17/21- The “List of WP-ORG E-MAIL Lists” is back!
Scroll down the main page, and see what lists are available on WP-ORG. Don’t see what you want or need? Write to feedback@west-point.org and request a list that you would like to have created for you!

The change password tool is working. You must know your current password to use this tool. If you need a password override, please write to feedback@west-point.org