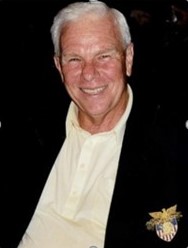 Fred passed away the evening of April 6, 2022 surrounded by his loving family.  The family, Eleanor primarily but supported by her kids, Ben and Karolyn, who live in the Richmond area, and Cindy, from Orlando, Florida, planned a service and reception that took place on April 30th.  Fred would have been very proud of his family.

Eleanor had a spread at the reception that was above and beyond – not an empty tummy in the house.  Toward the end of the reception there was an open mic used by family, classmates, and work associates to tell stories about, and remembrances of, Fred.

Displayed below is a photo taken by Pauline O’Connell at the reception. Not all the aforementioned classmates are included in the photo, but at least these were recorded for posterity.  The “Class of ‘60” card had been signed the evening of April 6th by 15 classmates who participated in our class’s Vero Beach outing hosted by Sam Kouns and Hank Maloney April 2-6.  Dick Healy had planned to deliver this card to Fred following the event.  However, as they were signing the card, little did they know that Fred was slipping away.

Fred’s ashes were interred at Hollywood Cemetery in Richmond on 2 May with his loving family in attendance.

Early this month (Nov ’21) Vince McDermott ’85,l USMA Director of Academy Advancement, was inducted as an honorary member of the Class of ’60 Marchback veterans group. The plaque below was presented on behalf of John Berti, Dick Healy, John Sherden, John Denton, Chuck Schrankel and Bob Totten

Click here to see a video recording of the presentation!

A Tribute to Dave Stem

To: Classmates, families, and friends of the Class of 1960:

On September 25, 2020, my wife, Nancy, and I were honored to represent our Class at the memorial wreath laying for our classmate, David Stem, in the West Point cemetery. Due to the Covid-19 restrictions we were the only two civilians at the ceremony. Others in attendance were the Garrison Commander, an Honor Guard firing team, a USMA Band contingent, a photographer from the AOG, and others from the MP Army Garrison unit.

On Saturday, a collection of 42 photos of the event was posted by the AOG and emailed to our classmates.

Below is an edited official description of the wreathing service:

Ladies and gentlemen, welcome to the first annual Brigadier General David H. Stem memorial wreath laying. For those of you who don’t know, today has a special significance to the military police officers here as tomorrow is the Military Police Corps’ 79th Birthday. This year’s motto is “Military Police, Multi Discipline – Multi- Domain”. Typically we celebrate the Regiment’s birthday with morale activities like unit runs and an MP Ball, however as we know this year has been anything but traditional. So instead of celebrating the traditional way, the USAG Military Police Company has chosen to commemorate this year by remembering one of our own who gave so much to the regiment during his years of service. Among the distinguished service members buried here at the West Point Cemetery, and the PMO’s namesake, is Brigadier General David H. Stem.

We would be remiss today if we didn’t touch on the history of the Military Police Corps before we talk about General Stem. The Military Police Corps achieved permanent status in the U.S. Army on 26 September 1941 yet our traditions date back to the Revolutionary War. General George Washington recognized the necessity of police functions both in the camps and on the battlefield.

Since 1941, the Military Police Soldiers have been involved in every major conflict to include Korea, Vietnam, and the Global War on Terror.

So why does this matter and what does the Military Police History have to do with why we are here today? Like General Washington, and General MacArthur, General David H. Stem also realized the importance that Military Police provided to the Army and was an innovator during his career.

General Stem was born on 23 January 1938 and received his commission from the United States Military Academy, West Point in 1960. General Stem had two major goals in life, to attend West Point and to become a General Officer in the United States Army, both of which he achieved. He served with distinction in his 27 year career to include assignments as Military Police Company Commander here at  USAG West Point, as a staff member at the U.S. Army War College, and as Commandant of the U.S. Army Military Police School to name a few. As the Commandant of the U.S. Army Military Police School, General Stem formed the MP Corps Regiment, established the MP Non-commissioned officer academy, and created the department of defense polygraph institute.

Tragically, General Stem died in 1987 while still serving on active duty in a plane crash. General Stem’s dedicated and inspirational leadership was the epitome of what makes the Army and the Military Police Corps successful.

Today we lay a wreath in his honor for his accomplishments and his sacrifice to the regiment. SGT Durham and Dr. John Denton, a representative from the class of 1960, will now lay the memorial wreath and the Military Police Company Firing Party will render honors, after honors are rendered, please remain standing for the Military Police Regimental March.

One of the most impressive tributes of the day was yet to come. After the wreathing ceremony Sgt Durham invited us to visit the BG Stem Memorial Wall that is located in the MP HQ building. This commemorative wall is truly a demonstration of the high esteem in which BG Stem is held by the officers and enlisted personnel of the West Point MPAG unit.  A photo of the Memorial wall is attached. 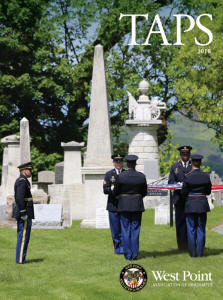